Fourth Mansions again: it's like a vintage animated cartoon made of words, w/ slapstick & monsters; it's also the weirdest theological treatise ever written

Inspired by a couple of recent excellent blog posts on Fourth Mansions (1969) by John Owen HERE and HERE, and by the excellent page dedicated to it on the Lafferty website, and by browsing Amazon reviews, today I wrote my own off the cuff Amazon review.

It's really a five star book. Very much so. In some ways, it might be Lafferty's masterpiece - in terms of his novels. But I'm trying to be realistic here and not come across as too fanboy-ish, as lacking any critical distance. The truth is, as a HUGE Lafferty fan (I've been writing a whole blog dedicated to his works since 2009), this is not actually my very favourite of Lafferty's novels. I prefer Past Master, Space Chantey, The Reefs of Earth, Arrive At Easterwine, Aurelia, Annals of Klepsis, and East of Laughter and I'd recommend you read several of them in addition to Fourth Mansions to really get the measure of this author.
But I'm not sure any of those other novels quite match the linguistic opulence and descriptive verve of Fourth Mansions. (That's how I feel about Gene Wolfe's Solar Cycle: my favourite is the last trilogy, Book of the Short Sun, but I can't deny that the first tetralogy, Book of the New Sun, is probably Wolfe's masterpiece and surely the richest in language and prose.)
Lafferty's voice in Fourth Mansions is like Charles Williams refracted through Raymond Chandler. Or Chesterton refracted through Black Elk. Or Flannery O'Connor refracted through George Orwell. Or Mark Twain refracted through Lovecraft. Or Colson Whitehead refracted through Kafka. Or Chaucer refracted through Walker Percy. Or the converse of any of those. Probably the nexus of all of them.
That's the main thing I want to say that hasn't been much mentioned by the other reviews here. That this is a delicious volume of prose style. Not in any way you might expect, though. Lafferty doesn't write like other humans. The narrative flow admittedly seems to bumble sometimes, but it's usually doing something deep at the moment it appears to be faltering a bit. And you'll probably only find that out on re-reads. But mostly the narration sings and sizzles and coruscates. It's a bit like a vintage animated cartoon made of words. Sentences seem to leap off the page and dance about in that mixture of fluidity and juddering jumpiness that early cartoons have. And it's also like old cartoons in that mixture of really silly slapstickery and really quite terrifying monstrosity they often evince in the impossible physical peregrinations they take the viewer through - where both bodies and landscape refuse to follow any known physics, yet cohere madly according to their own laws. It's very funny and very disturbing. That's Fourth Mansions.
One reviewer complained that the characters in this novel aren't developed, nor are they distinguishable from one another. I need to re-read it to see what I think about that. I've only read it one and half times so far (gave up half way through the first time, so I can sympathise with those who don't initially like it), but I've also dipped back into many passages many times over. What I will say is that the characters are drawn extremely richly in the 'cartoonish' mode I have just described. They are sketched in an incredibly vivid manner - Chesterton especially comes to mind in this connection - that makes them quite colourful, if of uncertain depth or distinction. It's worth noting that I have thought Lafferty characters weren't too 3D in some of his short stories, only to find on re-reads how incredibly wrong I was. They were rendered in a way I hadn't encountered before, so that I missed how incredibly solid and rich they were actually given to the reader, already fully formed. That may be the case in this novel, I'm not sure yet.
What makes the mad, terrifying, hilarious quality of the prose the more remarkable is that it is the vehicle of a deeply theological meditation, which many somewhat forgivably miss on a first read. Indeed, this book might be the funniest, wildest, weirdest theological treatise ever written. It's kind of about God making 'monsters' an indispensable but dangerous element of our inner and outer ecologies, that we must learn to integrate or be devoured by. Doesn't sound like anything you ever heard in Sunday School or 'Christian movies' or the like, right? Well, Lafferty is schooling believers as much as unbelievers in this book, calling everybody who will hear to a more fun and ferocious faith than we are wont to imagine Christianity is really all about. And he's trying to put readers in touch with ancient traditions that were really all about this kind of wild faith all along. According to Lafferty, modern religion has lost its way and needs to reconnect to its rich roots in order to evolve to its true potential. That's why the book is titled after a chapter in St. Teresa of Ávila's The Interior Castle and why some of the main biblical imagery it cryptically draws on is that of the prophet Ezekiel's terrifying Cherubim (angelic beings with four-faces - Ox, Lion, Eagle, Man - which attend the throne of God). Much of modern faith is too tame, suppressing holy monstrosity and thereby fostering unholy monstrosity. That seems to be a central aspect of the 'message' of this novel. And, admittedly, it is a sort of 'preachy' or 'lecturing' novel (there are long segments of actual lecturing and preaching late in the book!), but in a way that, if you ever experienced such in a church or university seminar room, you'd be on the edge of your seat - if not cowering behind it (trembling with laughter as much as terror).
For what it's worth, I first wrote about this book some three years ago here. That post has some great comments from other insightful Lafferty fans as well. 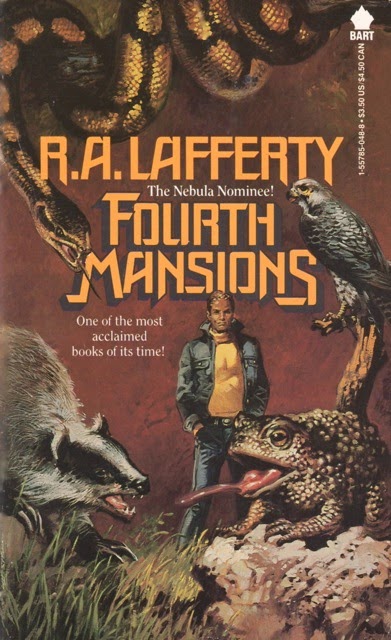