The following is the introduction found at the beginning of the 1984 Ace collection of Lafferty's short fiction Ringing Changes.  As far as I am aware, it is the only introduction that Lafferty himself wrote to one of his collections.  It's a rare treasure.  It gives some indication of what he hoped many of his stories were doing at the larger scale (rebellion and rebirth) and many witty little insights into individual tales.  He seems to me to be having quite a bit of fun in this introduction.  He is wryly sardonic as always, fun-loving and warm as always, penetrating and insightful as always, cranky and cracked as always, joyously energetic and raucous as always, and delightfully weird and whimsical as always.  I think this little piece of non-fiction by Lafferty, about his own work, is a treasure that deserves to be more widely known about and read and considered when interpreting and enjoying Lafferty's strange brew.  (All ellipses and emphases are in the original.)


INTRODUCTION
by
R. A. Lafferty

Most of these stories were written in the years 1968-1974.  They are of various sorts, but several of them are against-the-grain stories; songs-of-rebellion stories even, though their singing may be a little bit cracked and croaky.  This is because the world was unpatterned and unstructured during those years, and intolerably narrowed and shriveled.  (They conquered us so easily!)  We were a mesmerized world, and we were lost on a day when there wasn't even a battle scheduled.  So several of these pieces are restructuring and rebirthing myths, and there is a touch of groaning and travail in them.

But most of them are no such things.  The stories are these:

"Parthen."  The aliens had landed!...The world rang with cracked melody and everyone was in love with life....Never had the girls been so pretty....I believe that our minds are now on a higher plane....And every one of those men died happy.  That's what made it so nice.

"Old Foot Forgot."  One does whatever one can for "the oneness that is greater than self."...They say "Pray for the happy obliteration."...But somewhere there is a person who revolts and cries, "I would rather burn in a hell forever than suffer happy obliteration.  I'll burn if it be me that burns."

"Dorg."  Rain dances are good; fertility dances are good; so is prayer and chanting.  But there is nothing like ritual drawing and painting on cave walls to keep the world well fed.  What did you think was keeping the world so fertile and burgeoning these days?

"Days of Grass, Days of Straw."  Without the special days that are not in the regular count it just wouldn't be worthwhile.  We need them, we need them, and some of the champions will have to wrestle with the principalities and powers to get them.

"Brain Fever Season."  The seasons have returned in their appointed strengths.  Now we can live again.  Now we can be seasonable fools again.

"And Read the Flesh Between the Lines."  We'll not allow ourselves to be narrowed down forever in a straited world.  We'll explode and regain our real spaciousness.  We'll explode, we'll explode!

"Old Halloween on the Guna Slopes."  O ghostly night, O antic night, when we were ourselves young and ghostly.

"The Ungodly Mice of Doctor Drakos."  Maybe life is no more than globs of gas plasma, green and faintly translucent.  But how is it possible to grow hairs on globs of gas?  This is a sympathetic story about the only animals that everybody loves, mice.

"The Wooly World of Barnaby Sheen."  Barnaby's world was about a cubic meter in volume and it weighed 4,500 pounds.  It had a good selection of rocks, and it developed weather and lively inferior fauna.  Then it got a little bit out of hand.  This tale contains the saddest lament in all literature:  "My house is on fire, my shirt is on fire, and my houseboy has fleas.  What worse can happen?"

"Rivers of Damascus."  There are several way so of looking at any past event in history.  The para-archaeological probe, with a little dowsing added to it, may not be the ideal way, but it can sure cut through theat polarized data of what is sometimes called "conventional history."

"And Name My Name."  Is it possible that our true identity has been taken away from all of us, that we are only an apish shambles now?

"Why is our identity stolen from us.  Why are we robbed of it?" we ask.

"Sky."  Yes, you can pick and choose from among the various realities, selecting the best and most eventful of them and then selecting from the still more rarefied best.  You can do this for quite a while, so long as you are not spooked by things that are the wrong color of white, so long as you are able to refinance your bill with the piper, so long as you have hollow bones and a hollow heart.

"For All Poor Folks at Picketwire."  It wasn't a bad place at all compared to some others.  Consider that you can have a workshop in total vacuum, that it is dust free and without gravity, that it is spared the effect of every magnetized cloud, of every voltage differential, of every solar wind.  And it's beyond the influence of time and temperature and hard radiation and "all beautiful beams."  Nuggets of gold and orichalcum!  What a place to work!  Even the main disadvantage of it can be turned to an advantage, sort of, sort of.

Ah, but there was a way to get more water out of the well.  There were shabby people who still had plenty of shabby water, and they were willing to share it.  But it was stronger water than any of the people had met before.  It was raunchy water, it was vile water.  And the wit and ideas that came from the well now were raunchy also.

There's a twist to the tale of course, but it doesn't make the condition any less raunchy.

"And Some in Velvet Gowns."  Well, if you got all the skin burned off you by space winds, maybe you'd cover yourself with gaudy clothing too.  This is a "the-aliens-are-in-town-and-they're-taking-us-over" story.  But most of them weren't really wearing velvet gowns.  They just had their torsos painted to look like that.

"The Doggone Highly Scientific Door."  If you turned into a dog, would you be the first person or the last person to know it?  And if you turned into a dog interiorly but still kept your human appearance, who would know it first?  If there is an electronic device that can discern between dogs and people, where will it draw the line?

These questions are important since a lot of people are turning into dogs lately.

"Interurban Queen."  This is a "what-if" story.  What if the gasoline-powered internal-combustion "automobile" had not been outlawed early in its career?  What would the effect on manners and mores have been if the automobile, the "selfishness symbol," had been allowed to compete with such communal symbols as the Interurban Electric Trolley Cars?

"Been a Long Long Time."  We will not give a commentary or résumé of this story.  Should we begin to do so, you'd say "Oh, that's old, I know that one," and you'd be wrong.

These stories are intended to be entertainments, even the several of them that leak a little blood out of them.  They are amusements.

Be entertained then, be amused!  And the superior among you will even be delighted in several places. 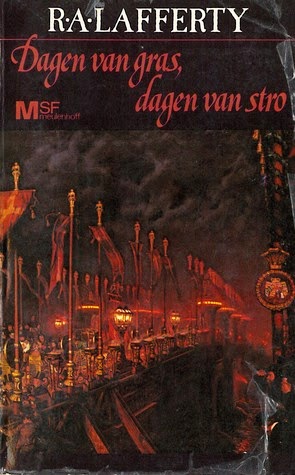 
Related on this blog:  Oh rise again and fight some more, dead people! (A Memoir by R. A. Lafferty)
Posted by Daniel Otto Jack Petersen at 9:16 AM